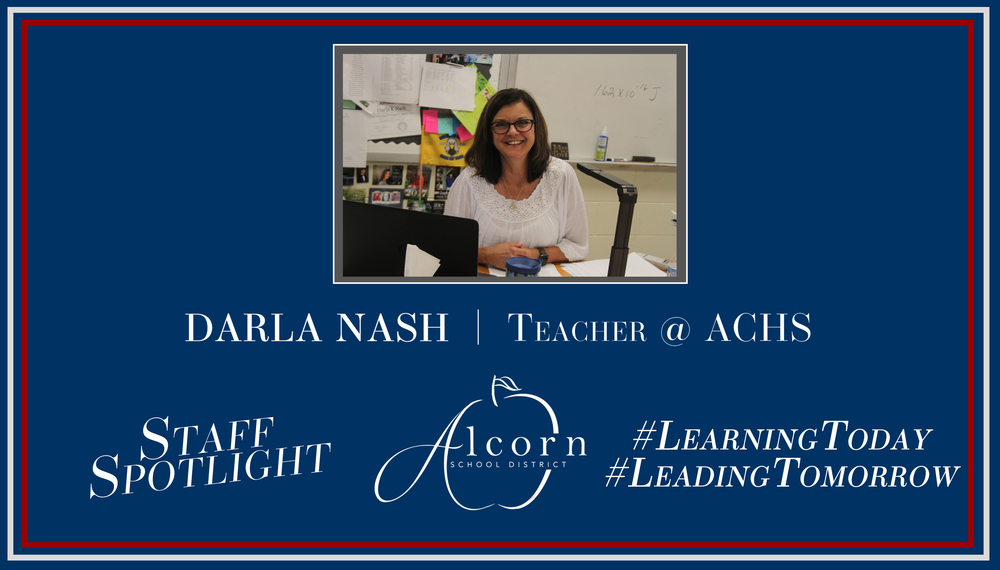 Alcorn Central High School Chemistry and Physics teacher Darla Nash is famous for her delicious desserts, infamous for her quick witted catch phrases, and marveled for her passion for science.

Mrs. Nash is a graduate of Kossuth High School and Blue Mountain College where she earned a degree in combined sciences. Later, she attained a Masters of Instructional Technology from Lamar University. Her career totals 29 years at five different schools. She is only one of a few educators to serve all four schools in Alcorn county during her time in the classroom. During those 29 years, she also spent a few years at Ridge Community High School near Davenport, Florida.

Mrs. Nash is a member of the National Science Teachers Association, Mississippi Professional Educators, and Quarknet, a particle physics group associated with University of Mississippi and FermiLab. As an active member of Quarknet, Nash has had the privilege of studying alongside some of the greatest names in modern day science.

While at Biggersville and Kossuth, she started the Math and Science Club.  Mrs. Nash recalled some of the excitement she experienced as club sponsor, “With this club, we were able to travel through Ohio, Kentucky, Tennessee, Texas, New Mexico, Colorado, Kansas, Missouri and Arkansas.  We also were fortunate to go to Italy, France, England and Costa Rica.” She worked with the robotics team while at Corinth and currently co-sponsors Beta Club at Alcorn Central where she has helped take multiple groups to regional and state competitions.

Her passion for her subject area and deep love and care for her students has welcomed her two Mississippi Economic Council Star Teacher Awards as well as being named 2020-2021 ACHS Teacher of the Year.

Mrs. Nash said she teaches to share her love of science saying, “I love to see students in the lab. My most favorite part of teaching is watching students understand the concept.”

Mrs. Nash is a wonderful part of our ASD family!