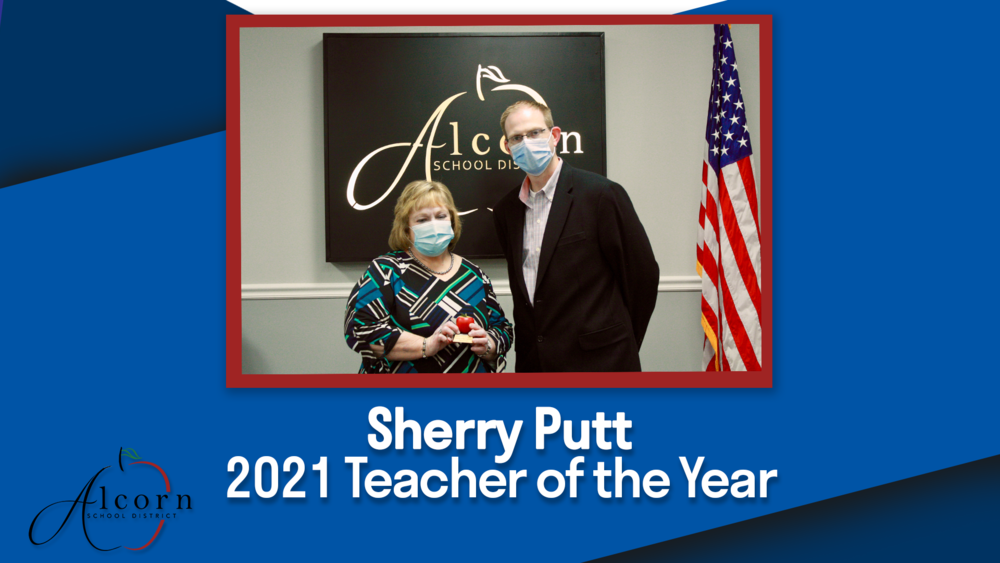 Alcorn School District is proud to announce that Sherry Putt has been named the 2021 ASD Teacher of the Year! Monday night, Ms. Putt was presented with gifts of appreciation from Interim Superintendent Brandon Quinn for her excellence in education and dedication to the young minds of the Alcorn Alternative Education Center.

Over the years, she has attended numerous conferences, workshops, and leadership events concerning subject area content, education philosophy, and technology in the classroom. In the years spanning between 1980 to 2010, Putt took classes at five different universities including Louisiana State University and the University of Houston. While staying current with her personal learning practices, she also remains engaged with several professional learning communities on the state and national level. She is a member of the Mississippi Professional Educators, Mississippi Council Teachers of Mathematics, National Education Association, and National Council Teachers of Mathematics.

Her desire and excitement for learning often spills over to her students. For Ms. Putt, teaching is not a job; it’s a calling. She can recount a time in her life right after quitting a factory job and while just beginning college that she wanted to “touch the future.” There is no doubt that she has been able to do just that.

At Alcorn Alternative Education Center, also known as Alternative School, Ms. Putt utilizes her eight different teacher certifications and endorsement to work with fifth through twelfth grade students that have taken steps down the wrong path. These students, for whatever reasons, have found themselves in a difficult situation. Ms. Putt’s goal is to make a bad situation better by pouring her heart into her students. To her, their past doesn’t matter. Their future hasn’t been written, and she makes her best effort to aid them in writing a good one.

Alternative School Director Randy Holt recently reflected on Ms. Putt’s impact on his school. He said, “At the alternate school, we measure student success one student at a time. We have a lot of kids that come through there – they are at risk and are often unreachable, but Ms. Putt always seems to find a way.” Ms. Putt has only been at the Alternative School for five years after spending her first two years in the Alcorn School District at Kossuth Middle School teaching 7th grade math.

For those that know Ms. Putt, it is no surprise that this nomination and award is not her first of the kind. In previous districts, she has been named Teacher of the Year twice, was the recipient of several local, state and national grants, and was a two-time Who’s Who in North American Education.

We are very thankful to have Ms. Sherry Putt as such an integral part of our district. She has touched the lives of thousands of students in her four decade career. According to Assistant Superintendent Angela Harris, who oversaw the Teacher of the Year process, Ms. Putt will represent ASD at the state level and be eligible to be one of four candidates for the first congressional district to be considered for the Mississippi Teacher of the Year award.

Putt was just one of the many district wide nominees for this honor. Those others that were named teacher of the year at their respective schools were Kellie Shadburn, Amy Williams, Darla Nash, Andrea Coleman, Holly Tyson, Holly Seago, Chrissy Lee, Donnita Ginn, and Dennis Deaton.