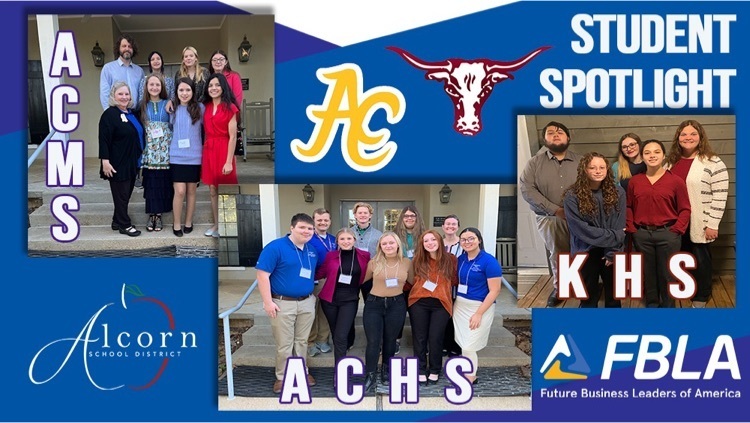 ​The Future Business Leaders of America in the Alcorn School District have had a great time learning and growing as leaders in the Mississippi 2022 State Fall Leadership Conference.

Students from FBLA chapters across the state joined together to propel the leadership potential of club members and local chapter officers. Members and advisors were a part of leadership seminars and activities at the Mississippi FFA Center in Raymond, Mississippi. Alcorn Central High School was joined by delegates of Alcorn Central Middle School and Kossuth High School. The trip down to Raymond was a great way to bond for many students and to build their network of contacts. Arrival to the FFA Center was completed by all three chapters coming together for a motivational message from the ACHS FBLA chapter and a whole group presentation from each local advisor.

The conference day started with an opening session where ACHS FBLA Secretary Reed Roberson led the invocation. Another two ACHS students were recognized in their official capacities as state officers: Aidan Anderson as State Parliamentarian and Talia Whitley as Northern District Vice-President.

Aidan and Talia worked over the last several days and weeks to prepare a presentation for student workshops during the conference. The two state officers chose to help their fellow FBLA members work on their public speaking skills by doing a presentation called "Let's Talk About Talking" where they discussed things like not using filler words, making good eye contact, being confident in your posture, and understanding your topic to the best of your ability. They were able to engage and empower all sorts of students throughout the day.

All local chapter members were able to attend various workshops of their choosing. The list of these included Design Your Success, Teamwork & Collaboration, Conflict Resolution, Talk About Talking, Dress for Success, Use Your Sense, ABC's of Marketing, and FBLA Quiz Bowl. Student were able to choose which 30-minute sessions they wanted to attend to better help tailor their leadership needs. Chapters were also pleased to have Shanta Villanuevo, Student Organizations Director for MDE, attend the conference and lead a large group session. She focused on having students prepare to be a winner in their competitions in the spring by giving them the skills necessary to rise to the top.

All chapters competed against one another in a marketing skit competition. Chapters were assigned a random item and were told to design a skit trying to market that item. The ACHS FBLA chapter did a great job with this task. They were assigned a box of building blocks and worked with our ACMS chapter to put together a very well executed skit. Alcorn Central was awarded 2nd Place Overall for skit design and performance. Kossuth High was assigned flower leis and emphasized how Luau Life is a lot of fun!

ASD students also had the chance to meet with the Mississippi FBLA Executive Board Members made up of leading advisors across the state. Coach John Mask of ACHS serves as an Executive Board Member and Ms. Gwen Dodds of ACMS serves as the Mississippi FBLA State Specialist. This occasion also included students going to dinner with the MS FBLA state officer team joined by the MS FBLA State Advisor, Mrs. Debbie Moore.

It was a great experience for all students that attended. Many of them are excited to utilize the plethora of leadership skills that were gained as a result of this conference. The FBLA journey will continue this year as students are now beginning to prepare for competitions and conferences that will kickoff in February.