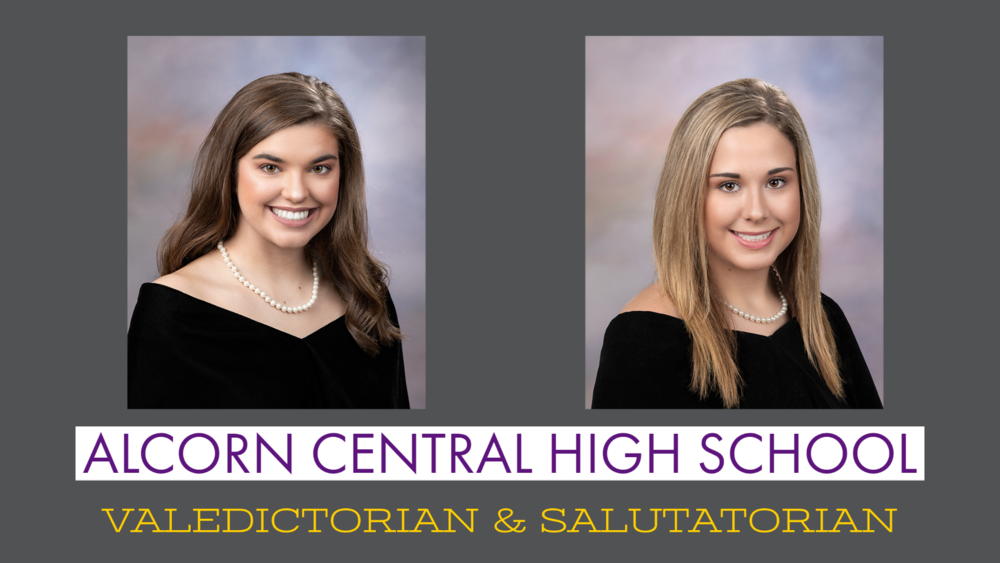 Alcorn Central High School is proud to announce the Valedictorian & Salutatorian of the Class of 2020. These students began their academic career thirteen years ago when they entered the hallways of kindergarten. Ever since, they have been working hard and excelling in the classroom. The honor of being named Valedictorian & Salutatorian is held in high regard. The individuals receiving these awards have maintained academic excellence among their peers. This requires hard work, determination, and a great deal of responsibility.

Lauren Young has achieved the title of Salutatorian by having the second highest accumulative GPA in the graduating class. Lauren is the eighteen year old daughter of Richard & Angie Young and the sister to Chandler. She has been very involved in athletics while attending ACHS. Lauren played volleyball for six years, basketball for three years, and was on the bowling team her senior year. She was also a member of many clubs: FBLA, BETA, FCA, Spanish Club, Math Club, and has served as Senior Class Reporter. Lauren also served one term on the Principal Student Leadership Committee after being selected by her teachers. Along with her many sports and clubs, Lauren often finds time to volunteer and serve on community leadership teams such as the Northeast Mississippi Youth Foundation.

When reflecting on her time at Alcorn Central, Lauren says she will always remember the love and support that she received. "The teachers and administrators are always there to help us when we need it. The coaches always push us to our highest point even though we don't think we can make it. AC has always been a place to call home."

After graduation, Lauren plans to attend Northeast Mississippi Community College to receive a degree in nursing. She then plans to further her education in nursing with hopes of becoming a Nurse Practitioner.

Tess Lancaster has achieved the title of Valedictorian by having the highest overall GPA among her classmates. Tess is the eighteen year old daughter of Eric and Anna Lancaster and  sister to Ty, Amelia, and Dinah. Tess has been very involved during her time at ACHS. She played volleyball for three years, was an ACHS cheerleader for three years, and was on the dance team her senior year. Tess is a member of the Math Club, Beta Club, Pep Club, FCA, and is a Community Connections Mentor. Tess has represented Alcorn Central on several occasions. She was a member of Junior Leadership Alcorn, attended the Hugh O'Brien Youth Leadership Convention, and was chosen to attend the APEX Leadership Summit at the University of Mississippi. Tess was also named the Class of 2020 STAR Student for having the highest combined ACT score and accumulative GPA.

Tess really loves the Golden Bear atmosphere at Alcorn Central. "My favorite thing about Alcorn Central would have to be how it is like a family. Everyone there wants to see you succeed. The faculty will do anything in their power to help you prepare for your future and they are able to form a real connection with you."

Following graduation, Tess plans to attend Mississippi State University to pursue a degree in mathematics. After Mississippi State she is considering a career in accounting or furthering her education to become an audiologist.

The Golden Bear family would like to say a very big congratulations to both Tess and Lauren for their outstanding achievements!

Senior Commencement Ceremonies are currently scheduled for May 21, 2020 @ 7PM.