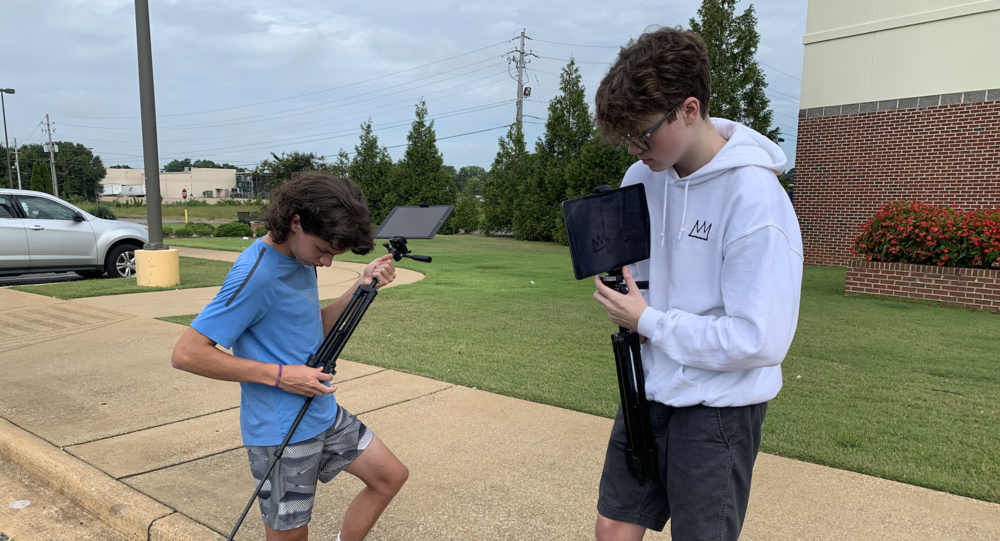 ACHS Class Spotlight - Students collaborate with Career Coach Lewis to write and film videos to help encourage our community to get up and go to work!

Digital Media teacher Coach John Mask and Competition Drama teacher Mrs. Twila Bridges met with Career Coach Rebecca Lewis about putting together a video to help sponsor her position as career coach and to help local businesses promote employment. This chance to make one video turned into a whole production, and we are quite proud of kids for their hard work.

Mrs. Bridges met with her second block Competition Drama students and tasked them with writing three different screenplays based off of the film synopsis provided by Mrs. Lewis. Students used their creative skills to prepare the scripts in a fun, unique, and effective way. Each group took a different avenue on the scope of their script and was able to really capture the intended audience.

After the writing process came to an end, Mrs. Bridges passed the scripts to Coach Mask, and he was able to work with his media students on the video planning, shooting, and editing portions of the project. Students were assigned roles such as director, producer, videographer, film assistant, and production assistant. This was a collaborative project and students were able to serve in many roles and really see all the many ways they could serve in a production setting.

A fun part of this project was the opportunity to travel off-campus to film “on location.” With the help of Coach Matt Wilbanks, students travelled to Sweet Peppers Deli and Dinner Bell in Corinth and Heritage Community Park in Farmington to film segments for each of the videos. Career Coach Lewis is also featured in the videos giving a presentation in the College and Career Center inside the ACHS Library.

Students were extremely excited to work on these projects and really had a blast putting them together. It is so cool to see students get involved in their academics as well as their community!

We hope you will continue to support the work that Career Coach Lewis is doing in our community. If you are a business owner or employer and would like to place a job posting on the ACHS Career Board or if you are currently looking for work, you can contact Career Coach Lewis at rlewis@alcornschools.org.

Check out the videos below and review the short synopsis posted with each one.

Video 1: “I Need a Hero” - The filmmakers of “I Need a Hero” wanted to display the idea that you have to work for the things that you want. It showcases three young ladies in search of something to eat. In order to pay for all the things they want, they go out and begin to apply for jobs.

Video 2: “Application Man” - The students behind this film wanted to stress the importance of getting a job and that those who encourage going to work are true super heroes. This film features Application Man distributing job applications for those in need.

Video 3: “Career Video Project” - This video is set to resemble the somber ASPCA commercials intended to get people to help the desperate animals. Our community has desperate businesses that are needing workers. One thing that can be seen almost anywhere now is a Help Wanted sign. Let’s be a part of the solution and help take down those signs!