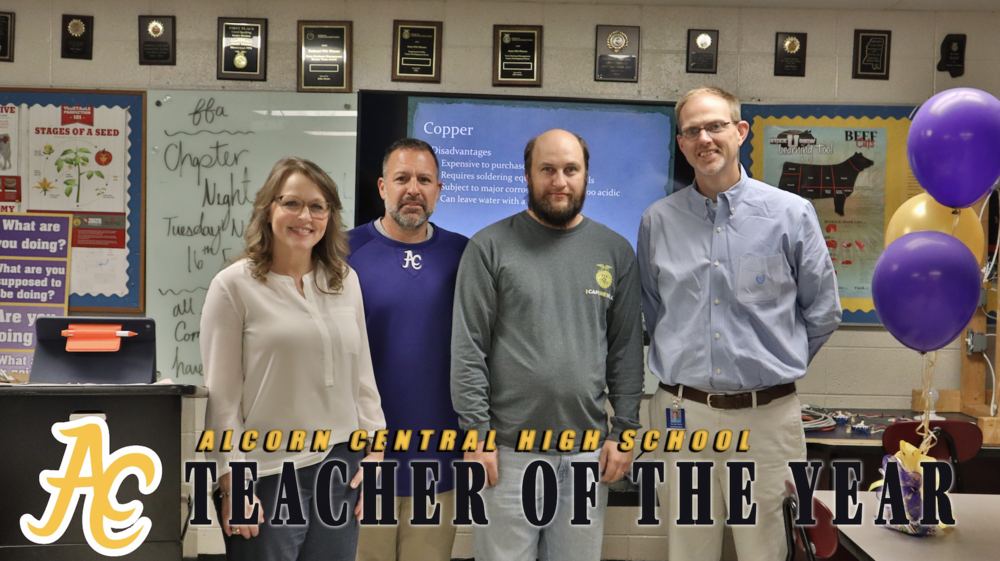 We are proud to announce the 2021-2022 ACHS Teacher of the Year is Mr. Brandon Derrick. He is a tremendous teacher and great asset to the Golden Bear family. It is our honor to recognize his many talents and present him to the rest of our Alcorn School District community as Alcorn Central High School's Teacher of the Year!

As a student, Brandon Derrick never considered a career in education.  He had planned a completely different career route, seeking a job as a Game Warden instead.  Brandon did participate in agricultural education and Future Farmers of America in high school for an active group at Biggersville High School.  He enjoyed learning about the science of agriculture and the camaraderie he found in Future Farmers of America at the competitions.  Still, education never crossed his mind as something he would be interested in pursuing.  While at Northeast Mississippi Community College and during his undergraduate years at the Mississippi State University, majoring in Forestry, he was helping other students in his classes learn and understand the material presented by his professors.  This ignited a spark that would eventually become his love for teaching.  He finished his bachelor's degree in Forest Resources in 2005 and worked as a Forester for a summer before beginning the master’s degree program in Agriculture and Extension Education.

He began his career in education in the fall of 2007 in the Monroe County School District.  He worked with that district for one year before being blessed with the opportunity to return home to Alcorn County in the Fall of 2008 at Alcorn Central High School where he has continued to teach and serve for the last 13 years.  While at Alcorn Central, he has had two senior state officers, one who served as vice-president and then president, another as state treasurer, and a junior state officer that served as state treasurer and state president.  Under his leadership, he had a student receive a gold award and a ranking of sixth in the nation in Job Interview, and another student who received a bronze award in Job Interview on the national level as well.  Also under his leadership, a farm business management team of three earned a team award of bronze and individually two silver and one bronze award on the national level.  Brandon has taken countless students to competitions who have won on the district and state level.  He was awarded a distinguished Service Award from the Future Farmers of America in 2017.  Brandon has been a member of the Association of Career and Technical Education (ACTE) and the National Association of Agricultural Educators (NAAE) for the duration of his 14-year career.  He has also served on the Board of Officers for Mississippi Association of Vocational Agriculture Teachers as North District vice-president in 2018-2019, North District Chairperson in 2020-2021, and as North District Alternate Vice-President in 2021-2022.  At his school, he serves his campus as a Canvas Captain, and he has been a member of the Principal’s Leadership Team both in an official and unofficial capacity for the past five years.  Brandon serves new teachers on campus as a mentor.

Brandon is a leader in his school, to his co-workers and students, and within the many organizations in which he participates.  Alcorn Central is honored to work with Brandon Derrick.