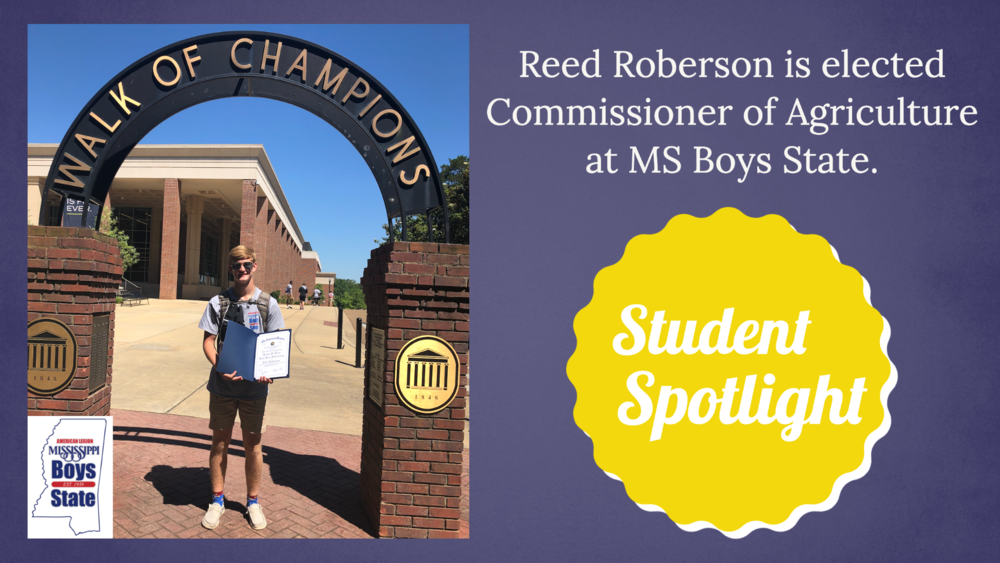 This year, upcoming ACHS Senior Reed Roberson had the chance to attend the 84th Annual Magnolia Boys State Leadership Experience sponsored by the Mississippi Department of the American Legion. Roberson was excited for the opportunity to represent Alcorn Central High School in this high intensity, rewarding leadership journey. Roberson is very involved at Alcorn Central and felt that he would benefit greatly from the experience. He is a member of the Purple Pride Marching Band,  Archery, Football, and Track teams as well as many clubs like FBLA, Academic Team, and FCA. However, his activity in the Future Farmers of America is what drove his platform while at Boys State.

According to the Magnolia Boys State website, "The American Legion is dedicated to strengthening America. We believe there is no better way to this end than to work with our nation’s youth in order to prepare them for the tasks they will face in the years to come. The American Legion, through its youth activities programs, plays a leading role in the development of tomorrow’s informed, responsible citizens. The American Legion’s programs of Boys State and Boys Nation are our finest examples of citizenship instruction for youth. Boys States are quite uniform in program structure through each Department (state) of the American Legion.

Forty-nine states and the District of Columbia conduct a Boys State program annually and more than 28,000 young men participate in these civic workshops each year. Through the week-long program, the young citizens learn how city, county and state governments function by actually doing the job themselves. Eligibility for all Boys State citizens requires them to be juniors in high school, with one year remaining before their graduation. This allows the young man the opportunity to apply his “practical experience” in government to his senior year in high school, and at the same time endorse and promote the program among fellow students."

Last week, high school boys from all across the state met in Oxford at The University of Mississippi to commence on their leadership journey with Boys State. This experience helps students model the operation of state government. In this process, students are divided into separate groups to act as political parties and are asked to represent themselves based on an agreed upon platform of ideas. Students that wish to run for major office are asked to campaign.

Roberson filed his qualifying papers to run for Commissioner of Agricultural and started campaigning. He used his knowledge and experience as a local chapter FFA officer and his experience competing in events like Extemporaneous  Speaking and dedication to the FFA Creed to propel his campaign to the forefront. His interest in agricultural and commitment to effective leadership allowed him to be elected as MS Boys State Commissioner of Agriculture a member of the political Big 8. As a result of his successful campaign, he was awarded a $1500 scholarship to use for college after he graduates ACHS in May of 2023.

Congratulations to Commissioner Roberson for running a successful campaign. We look forward to seeing how this adventure will propel you in your future endeavors.